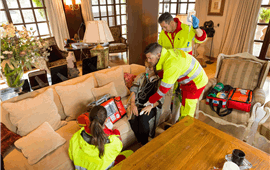 Epilepsy is a surprisingly common medical condition. This condition affects the patient's brain and causes them to have seizures, sometimes frequently. Our home GP service for epilepsy in Costa del Sol treats epileptic seizures at home.

Epilepsy is caused by electrical activity that comes in bursts. This activity takes place within the brain and it affects how the brain works temporarily. Epilepsy can start at almost any age but it's more likely to start in patients who are children or those who are more than 60 years old.

A lifelong condition, epilepsy can and often does get better over time.

It's not clear to the medical world why people suffer from epilepsy. It could be down to the genes patients have inherited from their parents. These genes affect how their brain works. Approximately 30% of people with epilepsy are related to someone else who has this condition.

The Symptoms of Epilepsy

The seizures that people often experience can affect patients in a variety of ways. This is because the symptoms depend on the area of ​​the brain where the electrical activity takes place.

Some of the symptoms include:

When you should call a GP

You should call for the  Home GP service for Epilepsy in Costa del Sol if you think you have had a seizure and you've never had one before. Please note, a solitary seizure might not mean that you have epilepsy it could be a one-time thing. However, it's important that you speak to a GP so you can determined what happened and why.

Supporting people with epilepsy is possible. However, you should know when to call for help.

You should call for help if:

How to Treat Epilepsy

There are treatments for epilepsy, and some treatments can prevent people from having any seizures. Other treatments might simply have fewer seizures.

Some of the treatments include:

While it's likely that you might need to be treated for the rest of your life, treatment might be stopped if you have no seizures over a specific period of time.

If you think you might have had an epileptic fit for the first time or you're concerned about your symptoms please call our Home GP service for Epilepsy in Costa del Sol.